Deprecated: Function wp_make_content_images_responsive is deprecated since version 5.5.0! Use wp_filter_content_tags() instead. in /home/customer/www/charmingbaker.com/public_html/wp-includes/functions.php on line 5383 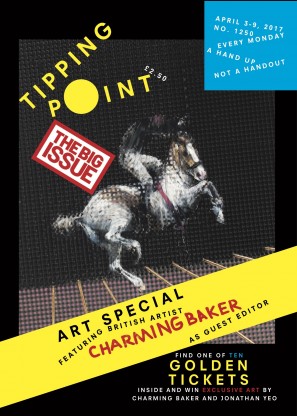 Charming Baker is delighted to reveal that the Big Issue Magazine of April 3 will be an art special, guest edited by Charming Baker himself. Built on a theme of Tipping Point, the special edition of the magazine will feature an array of British visual art heavyweights, all contributing unique and bespoke work.

The theme itself comes from Charming Baker. There are, he said, key decisive moments that lives can hinge on, moments that can tip things up or down. The Big Issue vendors know more keenly than most how delicate the balance can be, and how quickly that tipping point can have negative, or down the road, positive effect.

In honour of the art special edition, Charming Baker has reached out to the Art World and asked individuals to delve into their work archives and pick a piece of art representing a ‘Tipping Point’. The contributors assembled from Charming Baker’s vast contact book reads like a who’s-who of Brit Art and fashion. They include Jonathan Yeo, Sir Peter Blake, Rachel Howard, Hugo Wilson, Antony Micallef, Mat Collishaw, Keith Tyson, Sue Webster & Tim Noble, David Shrigley and Sir Paul Smith. It’s testament to The Big Issue’s value in British society that these, and many others, signed up straight away to do what they could to get involved.

“I felt truly honoured to be asked to guest edit this special art edition. Crucial times for us are just as much about when we’re tipped into success, as when we’re tipped out. Small differences ultimately make the one big difference. And for me that’s what the Big Issue is about.” Charming Baker

In collaboration with Charming Baker and Jealous Gallery in Shoreditch, The Big Issue will launch a special ‘Tipping Point’ exhibition at Jealous April 3-16, featuring an exclusive, limited edition of 125 print release by Charming Baker called ‘Man Falls’, the proceeds of which will go to The Big Issue, alongside works from other talented amateur and professional artists.