Deprecated: wp_make_content_images_responsive is deprecated since version 5.5.0! Use wp_filter_content_tags() instead. in /home/charmi17/public_html/wp-includes/functions.php on line 4859 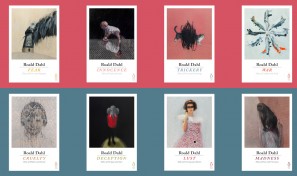 Charming Baker is thrilled to once again create illustrations for 4 new books from Roald Dahl; recollections of his acclaimed short stories for adults. Fear, Innocence, Trickery and War depict some of Dahl’s most sinister tales and are now available to buy from all good book shops. These four new editions join four others published last year; Cruelty, Deception, Madness and Lust.

‘I’ve often thought about Dahl’s work, how he never shies from human nature in all its forms, good or bad. How he accepts flaws and faults and turns them into something he can use to amuse and surprise us. These are the sorts of ideas I’m interested in when I paint. I like a narrative, I love a good story, I long for a twist. I also like the idea that you leave room for people’s idiosyncrasies, their strange ways and dark thoughts, which are part of us all. When I think about it, maybe much of my work has come as a direct result of growing up under the influence of Dahl’s stories. I had never put these ideas about Roald Dahl’s work and how it might have influenced me, together in any concrete way before, but seeing the marriage of words and pictures, maybe I have more to thank him for than just a lifetime of being wonderfully entertained.’ – Charming Baker